The Baffin Bay is found in the North Atlantic Ocean between Greenland and Baffin Island. The bay is covered in ice and icebergs for most of the year, making it impossible to navigate. In summer, 80,300 square kilometres in the North (known as the North Water) clears from the ice, and this is where the majority if the Baffin Bay marine life can be found. 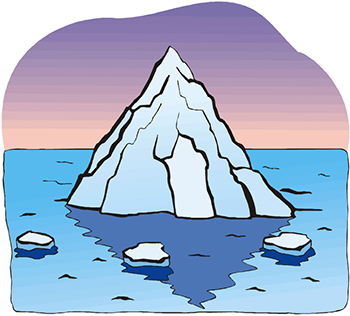 Although the water remains frozen for most of the year, there is still an abundance of fauna. Zooplankton and ice algae get air from the North Water in the bay. Around 20,000 beluga whales are living in the Baffin Bay, of which 15,000 of them live in the North Water. Other animals you can find in the Baffin Bay include a polar bear, walrus, various seal species, narwhal, rorquals and bowhead whales. The Baffin Bay is also home to roughly 400 different plant species, most of which are adapted to living in a saltwater environment.

Caribou and lemming rodents feed off these plants in the bay. Fish that can be found in this region include Arctic flounder, polar cod, capelin and four-horned sculpin. Other species of fish migrate to the bay from the Atlantic Ocean. The bird life is also abundant although, they do migrate South for the winter.

According to the US Geological Survey, an estimated 13% of undiscovered oil deposits and 30% of undiscovered gas pockets in the word are situated in the Arctic. This means that the Baffin Bay could potentially be holding large amounts of oil and natural gas. Exploration for oil and gas in the region has not yet been done due to a lack of interest. This will be great economic value to Greenland in the future should companies choose to mine for oil and natural gas in the Baffin Bay. 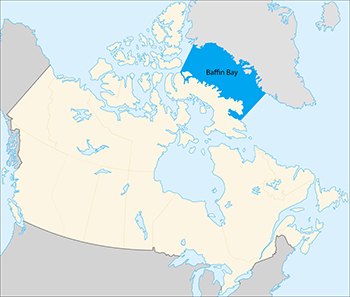 Answers
1. 500 B.C.
2. In the North Atlantic Ocean between Greenland and Baffin Island
3. The North Water