Alligators are a species of reptile are while they resemble crocodiles, they are very different animals.

Alligators have a snout that is black in color, rounded and wide and even with its mouth closed you can still see its upper teeth.

There are two types of alligators in the world and each have different size, weight and behavior patterns. 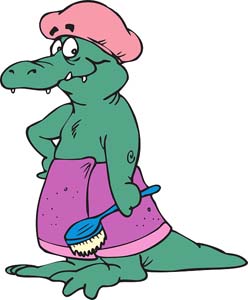 The live in the southern states of the United States, covering from North Carolina through to Texas.

The most populated areas are in slow-moving ponds, rivers, swamps and lakes.

These alligators live in along the river basin of the Yangtze River in China, which is near the Pacific Ocean.

The most populated areas are in lakes, rivers and swamps but they have been confined to mostly ponds and ditches in and around areas where food is grown.

The confinement is due to the fact that much of the area where they used to live has been converted to rice paddies.

Alligators are ‘cold-blooded’ and therefore they don’t have the ability to keep themselves warm.

They are often seen basking in the sun to bring their internal temperature up.

If they become overheated they use the water to bring their temperature down.

At one time, American alligators were hunted to near extinction due to the popularity of the alligator hide for purses and wallets.

They were on the endangered species list and are considered one of the greatest success stories for bringing a species back in such huge numbers. 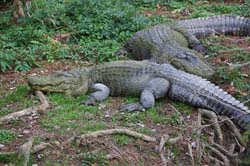 Alligators in Florida will search any area to live in, often moving from lake to lake. This takes them over streets as they look for new homes.

In Florida, alligators have been found in people’s swimming pools, under cars and houses and even at their front doors.

This is due to the fact that they have gotten lost.

There are many ponds and lakes in Florida that are surrounded by homes and families that have alligators in them.

Many county officials will only remove the alligators if they have shown aggressive behavior or if they are larger than a specific size.