Alkali metals are a set of six elements that together make up the group 1 of periodic table. In fact the only element in group 1 that is not an alkali metal is hydrogen. Alkali metals are all located in the first column of the periodic table. Members of this group are sodium, lithium, potassium, rubidium, cesium and francium. Alkali metals are found in nature as salts and not as free elements. The most abundantly found element of the group is sodium, which is followed by potassium, lithium, rubidium, cesium and francium, in that order. 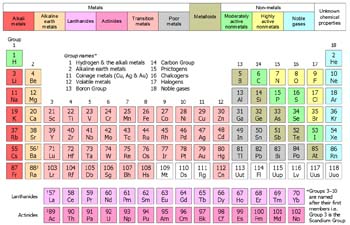 Alkali metals are all soft and can be cut even with a knife. They are all shiny and have a single valence electron in the outer shell. All of them are seeking to lose this single electron to have a complete shell which is why they are very reactive. While alkali metals are tarnished when exposed to air as a result of oxidation, they react when they come in contact with water. Some alkali metals even explode when they are brought in contact with waters. Cesium and francium are the two most reactive elements of the group. Alkali metals also have characteristically lower density, compared to other metals. They are also good conductors of electricity.

Alkali metals are widely used in various fields. Some of their more common uses are as follows:

Sodium (anti-scaling, as an alloying metal, to manufacture several compounds such as sodium chloride and sodium hydroxide).

Potassium (fertilizers, food nutrient, industrial usage as a neutralizing agent and in laboratory as a heat transfer medium and for reactive distillation).

Cesium (as a drilling fluid in extractive oil industry, atomic clocks, electronics, as centrifugation fluids in molecular biology, chemical use, medical use and as a propellant in ion engines).

Francium (the instability and rarity of francium means it has no commercial application. It is however, used for research purposes in the field of chemistry).

Listed below are some very interesting and rarely known facts about alkali metals:

Sodium and Potassium are included in the list of ten Most Common Elements in Earth’s Crust. While sodium with 2.6% of earth’s crust is ranked 6th, potassium is the 7th most common element with a share of 1.5%